Proof That Stress Makes You Sick 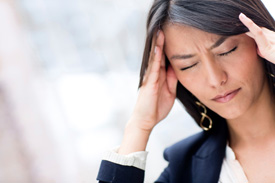 It’s no big secret that stress can have an effect on a person’s immune system, but can excessive stress literally make you sick?

Based on recently published animal research, Australian scientists believe the answer to that question is a definite “yes” – and they’ve discovered the substance responsible for making you sick.

The study was carried out on a group of genetically modified mice that were subjected to different types of stress. The researchers found out that under normal conditions, immune cells naturally produce small amounts of a hormone called neuropeptide Y, which activates TH1 cells (or “helper” cells) that seek out and destroy viruses and bacteria. Under extreme periods of stress, however, too much neuropeptide Y can be released into the bloodstream, which prevents TH1 cells from attacking pathogens even after they’ve been identified by the immune system.

While there is no escaping stress entirely, there are several ways to help reduce the amount we encounter on a daily basis.

In addition, regular exercise, yoga, meditation, and other healthy lifestyle factors can all help lower stress levels to some degree.

If you suffer from too much stress, talk to your chiropractor about ways to reduce the amount of stress in your life.